My research broadly centres on the aspects of ancient moral psychology which underlie prudentialism, and the strategies which ancient thinkers and schools recommend for conceiving of and concerning oneself with one’s own good. This starts by asking questions about the nature of prudential self-concern as it is found in Plato, Aristotle, and the Hellenistic schools, including its scope: do they concern themselves with (and urge others to concern themselves with) their future selves, or the good of their lives as a whole, or their posthumous good, or recollected goods of the past? How does this explain the specific strategies and therapies they recommend their followers adopt in order to bring about the right kind of self-interest, and then pursue that interest?

Within this area, I am especially interested in attitudes to memory, anticipation, pleasure, and pain.

I also work on women in ancient philosophy. I have a number of projects underway which engage with the philosophical thought of various ancient women, as well as meta-philosophical issues of how to integrate these important figures into the canon, methods of recovering their thought, and how to teach their thought.

I have two articles which have appeared recently, and three chapters forthcoming: ‘The Jellyfish’s Pleasures in Philebus 20b-21d’ appears in Phronesis 64.3; ‘Cicero Reading the Cyrenaics on the Anticipation of Future Harms’ appears in Epoché: A Journal for the History of Philosophy 23:2 (Spring 2019). Meanwhile, ‘Jars, Sieves and Souls: The Myth of the Water Carriers in Gorgias 492-3’ is forthcoming in Plato’s Pleasures: New Perspectives, ed. J. Aufderheide and M. Erginel (OUP), ‘Women Philosophers in Antiquity and the Reshaping of Philosophy’ is forthcoming in Women’s Perspectives on Ancient and Medieval Philosophy, ed. I. Chouinard, Z. McConaughey, R. Noël and A. M. Ramos (Springer), and ‘Modelling the Memory and Anticipation of Pleasure: A Response to Warren’ with Margaret R. Hampson is forthcomung in Psychology and Value in Plato, Aristotle, and Hellenistic Philosophy, ed. M. R. Hampson and F. Leigh (OUP).

I have also published a Review of David Wolfsdorf’s Pleasure in Ancient Greek Philosophy (CUP, 2013) for Bryn Mawr Classical Review (November 2013), and the ‘Hedonism’ entry in The Encyclopedia of Criminal Justice Ethics (August 2014).

I am co-editing, with Caterina Pellò (UCL), a volume on ‘Women Ancient Philosophers: Recovered Ideas and New Perspectives’ for CUP. This is part of a project on Women Intellectuals in Antiquity which included a conference in Oxford in February 2020. It includes a chapter I will author entitled ‘Arete of Cyrene and the Role of Women in Philosophical Lineage’, as well as a substantial introductory chapter, co-authored with Caterina.

My DPhil thesis concerns Plato on Hedonist Prudentialism. In it, I consider Plato’s arguments, in a number of dialogues, for why hedonists are incapable of successfully planning their lives with pleasure as their aim. The dialogues I am mostly concerned with are the Protagoras, the Gorgias, Republic IX, and the Philebus, and specifically the passages in which Plato critiques hedonists’ attempts to plan their lives. These critiques are frequently charged with missing the mark by failing to show that, and why, pleasure seekers will fail in their principal intention. My thesis aims to show what these passages achieve, what they reveal about Plato’s view of pleasure and pain, why they fail when they do, and what this failure shows. I argue that, rather than becoming increasingly pessimistic about pleasure across these dialogues, Plato develops an increasingly fine-grained conception of pleasure, becoming sceptical of only some types as he goes along, while becoming more enthusiastic about others.

My MPhil thesis is titled ‘The Cyrenaics on the Anticipation of Pain’. In it I attempt to reconcile this school’s hedonism, presentism, and their theory of passive perception with some strange advice, reported by Cicero, in which they insist on the importance of anticipating possible future evils, the pre-rehearsal of which supposedly mitigates pain. I argue that the Cyrenaics’ striking advice about the future is explained by a kind of behavioural economics game: in anticipating merely possible future pain, they can lessen the shock of events which come to pass, thereby reducing the pain, without experiencing any increased pain in the present. In order to dissolve the apparent tension between these strands of their thought, I argue that the Cyrenaics developed a two-level psychology, where originally or primarily psychic events have a different status, which justifies their different attitude to them.  I argue that a correct understanding of the Cyrenaic position dissolves the apparent tension, explains how they could offer this advice, and shows us why it would be good advice, e.g. why a Cyrenaic would be rightly concerned with future pain.  In doing so I will reflect on what the Cyrenaic account teaches us about the psychology of pain, and argue for its continuing philosophical relevance.

Arete of Cyrene and the Role of Women in Philosophical Lineage, Ancient Philosophy Research Seminar, The Institute of Classical Studies, Senate House, London, May 17, 2021 [Invited].

Arete of Cyrene and the Role of Women in Philosophical Lineage, The American Philosophical Association Central Division, Invited Symposium: Representations of Women and Gender in Ancient Philosophy. February 24-27, 2021, virtual [Invited]

Old Wives Tales? Challenges and Opportunities in Teaching Women in Ancient Philosophy, with Branislav Kotoc. The British Society for the History of Philosophy Annual Conference, Durham University [re-scheduled to April 2021 due to COVID-19 disruption].

Epicurus on Pain and the Memory of Pleasure, The Southern Association for Ancient Philosophy, University of Oxford, September 9-10, 2019 [Invited]

Cicero Reading the Cyrenaics on the Anticipation of Future Pain, The British Society for the History of Philosophy Annual Conference, King’s College London, April 24-26, 2019.

The Domain of the Virtues in the Eudemian Ethics, Society of Ancient Greek Philosophy, Fordham University, New York, NY, October 24-26, 2014.

Epicurus on Pain and the Memory of Pleasure, Ancient Conceptions of Eudaimonia Conference, University of St Andrews, Scotland, May 13, 2012. 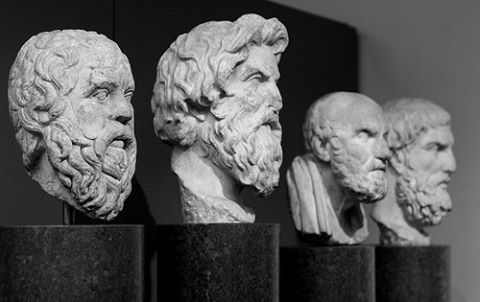